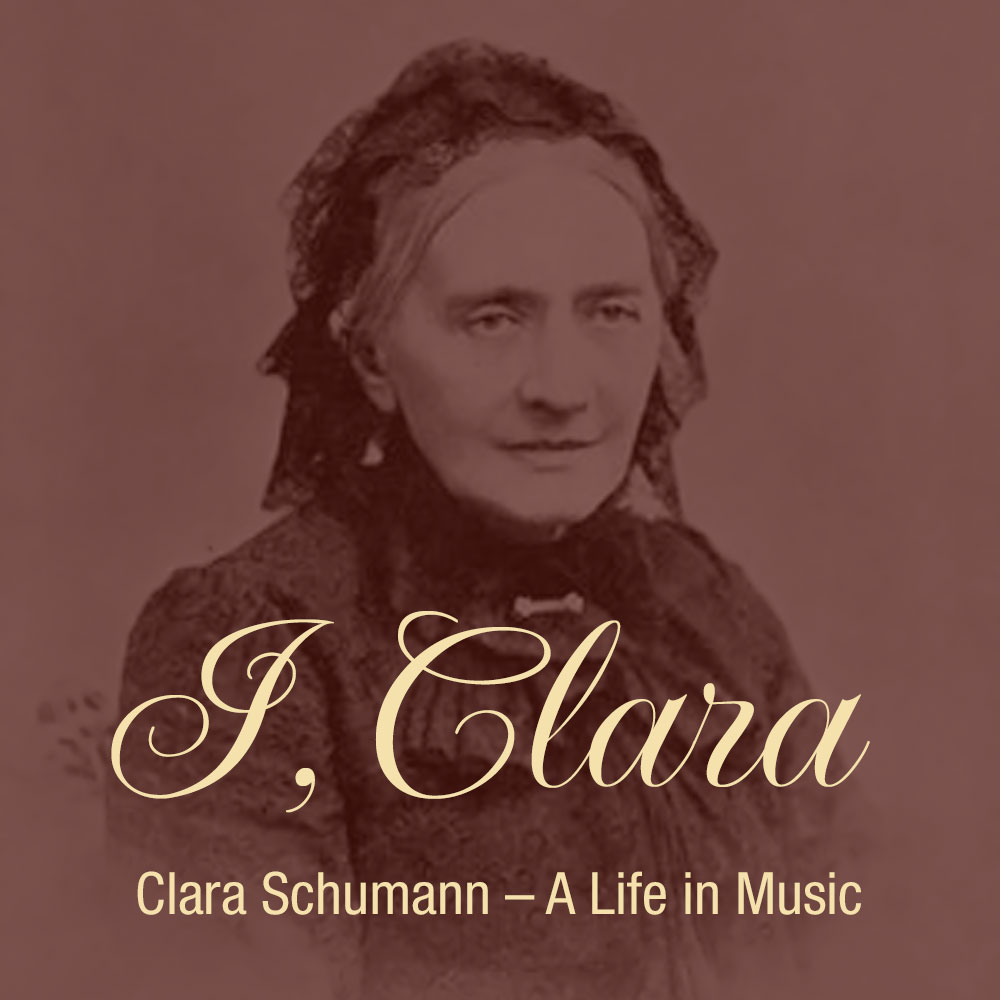 Created to celebrate 200 years since Clara Wieck Schumann’s birth in 1819, I, Clara tells her extraordinary life story in her own words.

It is the sixth Composer Portrait created by Lucy Parham and it received its London premiere at Kings Place in October 2019, as part of both the London Piano Festival and the Venus Unwrapped Festival.

Clara Schumann was a truly exceptional woman, not just a devoted wife to the composer Robert Schumann, but a groundbreaking musician in her own right. Over a period of 60 years she gave over 1,500 concerts and determined the format of the kind of piano recital that is familiar to us today.

As a child prodigy, she was groomed for stardom by her piano-teacher father, Friedrich Wieck. By the age of eight she was dazzling audiences throughout Europe.  Having married Robert against her father’s wishes, she became the mother of eight children. When her husband declined tragically into mental illness and an attempt at suicide, she continued both to run the household and to make an international concert career to support the family.

Clara Schumann championed the works of her husband and of Chopin, Mendelssohn, Brahms and many others. She herself was also a talented composer, producing a piano concerto, numerous solo piano works, chamber music and songs.

The narrative of I, Clara, drawn from letters and diaries, is interspersed with live performances of her works, and of music by Robert Schumann, Brahms, Liszt, Felix Mendelssohn, Fanny Mendelssohn and Chopin.

The CD of I, Clara (narrated by Dame Harriet Walter) was released in October 2019. In November it was chosen as Record of the Week by Andrew McGregor on BBC Radio 3’s Record Review. It was also highly praised by Gramophone Magazine and named Album of the Month with a 5 star review from Pianist Magazine.

I, Clara has been recently featured on BBC Radio 4’s Today Programme and Woman’s Hour, as well as on BBC Radio 3, Classic FM and was Pick of the Week in the Sunday Times.

“Hearing Clara’s story in her own words, interspersed with relevant music, is a joy. Harriet Walter’s delivery is utterly compelling. Performing on a glorious Fazioli, Parham’s playing is eloquent and engaging.”

“The first movement of the Sonata in G minor, phrased as if by a singer, with a touch of rubato and dextrous fingerwork, makes one yearn for a complete recording. Parham’s Arabesque smiles in the way that we’re told London audiences experienced when Clara Schumann played it to them. The Fazioli is admirably suited to this repertoire, as Lucy Parham’s heartfelt performances make clear.
Harriet Walter delivers a blessedly undevout reading of Lucy Parham’s narration, her timing impeccable, her manner untheatrical.
This celebration of her life, with the music fitting the narrative so well, is another fine tribute to this remarkable woman in her bicentenary year.”

“Parham gives us a beautifully-crafted tribute to the composer, in both words and music. This album, which deserves repeated listening, is a fitting tribute to an extraordinary woman. Be prepared to shed a tear.”

“It’s my favourite thing for Clara’s 200th anniversary – her life story beautifully told in her own words, read by Harriet Walter, brought to life with music picked and played by Lucy Parham. A beautifully designed portrait of Clara. If you are not moved to tears by Clara’s account of his death and by Parham’s choice of music you are made of stronger stuff than I am. It’s a seriously moving tribute – and my Record of the Week”

“Lucy Parham’s trailblazing evening concerts in which she fuses music and words with the help of some of our most distinguished thespians, have become one of the must-see events on the musical calendar.”

“The music has been so well chosen to illustrate the life story. The story itself has been beautifully constructed by Lucy Parham and narrated with a combination of tenderness and strength by Harriet Walter that feels just right.”